‘presence (Un) presence’ is a current chapter of exploratory work. A research in progress in preparation for public exhibition. In an advanced yet still experimental state. Images shown are from studio rehearsals. Additional documentation, score examples and more concise writing will follow..

The project is concerned with reimagining and extending notions of musicality and musical form through performative installation practice. Within conceptually driven, expanded art practices of today, the sonic essentialism of prevalent ‘sound art’ feels regressively self-referential. In response, with ‘presence (Un) presence’ I wish to contribute to the development of a postmedium discipline based in an advanced understanding of music’s modes of aesthetical organisation and working principles, to inform transdisciplinary compositional strategies. Where the meaning of music composition has transformed from referring to a specific set of protocols and tools to produce something predetermined —a sound piece—, to an open cluster of strategies and structures that can be used as a generic capacity for production and analysis. In this sense the project builds on early visions of an extended musicality as they were coined during Fluxus, but largely neglected afterwards. It also borrows from the more recently establishing idea of expanded choreography to potentially include non-human dynamics and relations between things, artefacts and objects as part of the contemporary choreograhic practice.

Based in an evolved sense of music composition, matter and affect, ‘presence (Un) presence’ therefor aims to address an expanded field of concepts, materials and relationships outreaching the cultural confines of music. It particularly probes the implications and possibilities raised by the question how non-sounding agencies can express musical form and musicality —or contribute to it—, by entering into composition with both the sounding and the silent, the ‘musical’ and the ‘non-musical’ —the work will converge sounding and silent objects, immaterial media, performance, participatory actions, spatial coordinations, and articulations of the local—. Thus, the research attributes to the non-sounding the capacity to be and express musically, and affect musically those who pay attention. As an experimental point of departure, it takes that musical expression does not necessarily emerge from the sounding and our hearing of it, but can be created at the intersection between the sounding and the non-sounding, or even be silent all together. 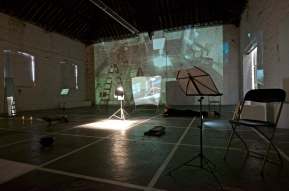 If a musical body or act is no longer conceived of as sounding by definition, another mode of perception is required for both those participating in the work and those observing it. A mode not relying on the usual mechanisms of recognition, identification and communication which are central to music as a sonic encounter. A mode foregrounding the sensorial challenge of translating between different mediums of expression as an active state of co-constituting the work. How can music propose a space for perceiving and interpreting things that don’t necessarily sound or adhere to a musical idiom? What does it mean to make a music composition for materials and actions, where sound is no longer the mere centre of attention? Can the non-sounding have musical agency and how could it be evoked? How can musical qualities like duration, rhythm, timbre, harmony, arrangement and temporal form be made tangible through non-sounding agencies? Can the sounding move with and within the non-sounding, not for the sake of its own statement or survival, but to start the exercise of listening as a relational bridge, an experiential hook to include external-to-sound actors and environments within the scope of our hearing? 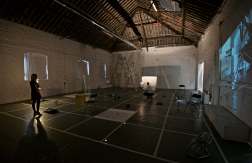 Could the sounding help us turn towards its own process of dematerialisation, away from its own exclusivity, and propose a notion of music which composes itself in the interstitial space between its bodies, sounding and non-sounding, more than in its bodies? This interstitial space is transformable, flexible, mobile and immaterial in the sense that it doesn’t subscribe to one type of material. Its nature highlights the question how music compositional strategies and methods could be reconceptualised and put to practice within the expanded musical field. In ‘presence (Un) presence’, both the question and the space are animated, and animate, through an emergent methodology of scoring. The development of a score-based, event approach to installation is central to the project. Proposed transmodal, experimental (inter)actions, instigate a performative inquiry into variable dialogue between so-called ‘musical’ and ‘non-musical’ agencies, actively pointing our attention towards the experience of a novel musicality based in the processual, transient states and developments of intermedial configuration, rather than the specifics of material being. Performing the installation —compiling and experiencing its relational presence in space over time—, is the installation, with the physical traces exhibited as a possible result. Experience of the formation process is constitutive to the outcome, much like the unfolding of musical form in time through listening. The score, and the open, indeterministic kind especially, foregrounds these qualities of multiplicity and transformation, both intrinsic to the nature of music composition and performance. Open, indeterminate scores are utterly intermedial in their potential, yet rooted in a musical sense of system, process, reading and delivery. Research situations in and of themselves, their hermeneutics are inherently musical.